Crazy ants are a highly invasive pest that is best contained by pest management professionals like The Bug Lady Pest Control in Bella Vista, AR, and Neosho using these strategies for identification and control.

In areas where they become established, TCA (Tawny Crazy Ants) disrupt the ecological balance by outcompeting native species. They dominate food resources and nesting locations of native ants, thereby driving many species to near extinction. TCA are displacing the red imported fire ant in areas where the two overlap. The only species able to coexist with TCA are small-bodied ants and ants that live in trees and small, hollow-nesting cavities inaccessible to TCA.

Because of their need to expand nesting sites as populations grow, TCA are known to nest in cavities and other locations where sensitive equipment is housed. This can lead to ruined electrical equipment.

How to Identify a Tawny Crazy Ant

In much of their known distribution, TCA occur with Argentine ants, a highly invasive ant pest from South America introduced in the late 1800s. Because the two species are similar in appearance, size, and biology, pest management professionals (PMP) must be able to identify both species (figures 1 and 2). A reference (Gochnour et al. 2015) listed at the end of this publication can help you differentiate between these two pest ant species. 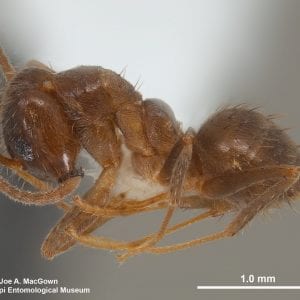 Figure 1. Under high magnification, TCA appear much hairier than the Argentine ant below. 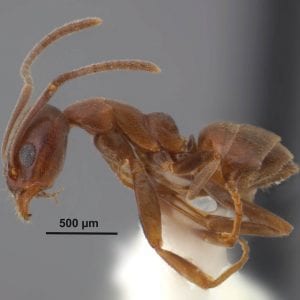 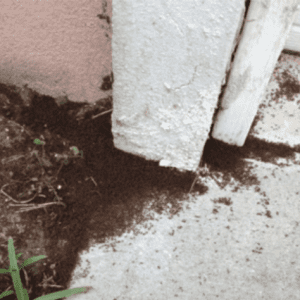 Figure 3. Dead tawny crazy ants commonly collect in corners and along walls on the outside of infested structures, and is a telltale sign of infestation.

A visual sign of TCA presence is large numbers of dead ants found outdoors piled in corners of structures or along walls next to buildings that have been treated with a residual insecticide (figure 3). Trails of TCA are fast moving, erratic, wide, and have vast numbers of ants. They do not form mounds in the landscape but can tunnel in loose soil. If TCA are suspected, a sample of the ants, as well as photographic documentation, should be sent to a local county Extension agent. The agent will identify the ant or contact a specialist to confirm identification. Proper identification is necessary to develop a management plan based on the pest’s biology and life-sustaining requirements.

TCA expansion is either by slow, methodical crawling by worker ants or by jump movement, where ants are inadvertently moved (in a potted plant, mulch, etc.) from an infested location to an uninfested location. TCA may expand their local range by 800 to 1,300 feet per year by crawling. Jump movement is almost always aided by humans and is characterized by the sudden presence of the ants in an area where they were previously unknown.

When the ants arrive at their new home, they must establish new nest sites as colonies grow and expand. Because colonies consist of multiple egg-laying queens, worker numbers may increase rapidly in the heat and humidity of summer. As colonies grow in size, they begin filling every potential nest site.

TCA commonly nest in or under anything in the landscape that holds moisture (rocks, patio stones, potted plants, rotted logs, the bark of fallen trees, etc.). See figure 4. The common denominator of TCA nest sites is a dark, secluded, humid environment necessary for the ants to live and expand colony size.

Figure 4. The common denominator of TCA nest sites are dark, secluded, and humid environments. Examples include: 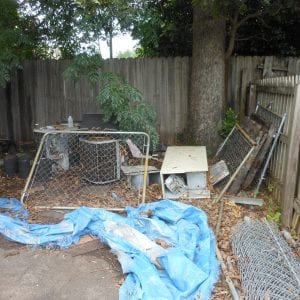 (a) old tarps and hollow pipes; and the headspace between 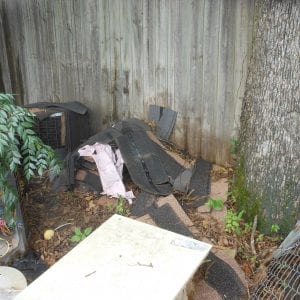 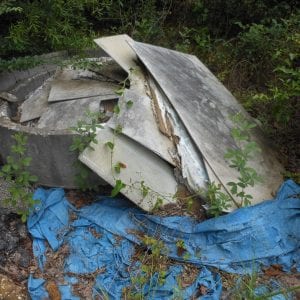 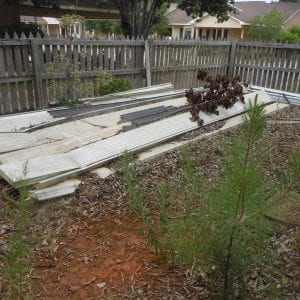 Pest management professionals emphasize  the necessity of removing yard debris and trash in order to deny TCA potential nest sites. In addition, all vegetation should be kept from touching outside walls, gutters, and other parts of buildings, since TCA forage into shrubs and trees while collecting honeydew produced by aphids and scale insects.

The PMP work with property owners to develop a plan to eliminate, as much as is economically and practically feasible, all natural and man-made litter, debris, trash, and outdoor clutter (figure 4). When items are removed, it is vitally important to avoid the inadvertent spread of ants to uninfested sites. Before trash and other debris leaves the property, it should be thoroughly inspected to ensure that it is free of ants. Any infested materials should be treated, as appropriate, with a liquid insecticide before removal from the property. Effective ant management requires an integrated pest management approach that involves landscape modification, elimination of food sources, landscape treatment, and if necessary, barrier treatment for structures.

The practice of keeping the outdoor environment free of debris is often not enough to alleviate the nuisance aspects of this persistent ant pest. Insecticides in the form of baits, liquid sprays, or granular (nonbait) formulations oftentimes are needed to provide relief.

Your Bug Lady Pest Control Professional in both Bella Vista and near Neosho will operate with the expectation that long-term relief from the use of chemically based pest control is unlikely. This is based on the ant’s biology (large populations over large areas that cannot all be treated) and the inherent limitations of some contact insecticides with short residual effectiveness given the extreme outdoor conditions prevalent in summer when ants are at their peak activity.

Persistence and vigilance are required. Frequent return trips (hence the importance of scheduling quarterly service) may be necessary following initial treatment. Management of TCA requires numerous tactics, both nonchemical and chemical. Refer to Insecticide Basics for the Pest Management Professional for guidance.

Before control measures are undertaken, a thorough inspection of the outdoor premises should be conducted to determine the extent, and especially origin, of TCA infestation. The inspection should help the PMP to determine where to treat and which products and formulations to use.

Although there are a number of chemical approaches that may be utilized for the treatment of existing TCA infestations, no single insecticide-based approach is completely effective. An integrated approach that incorporates both chemical and nonchemical techniques is best suited for the management of this highly invasive ant. When chemical controls are used, especially liquid sprays and granular products, it is important that PMPs read and strictly follow all product label instructions. Some insecticides are highly toxic to fish and other aquatic life. It is therefore important to avoid the application of pest control products in a manner that might inadvertently contaminate a local body of water. 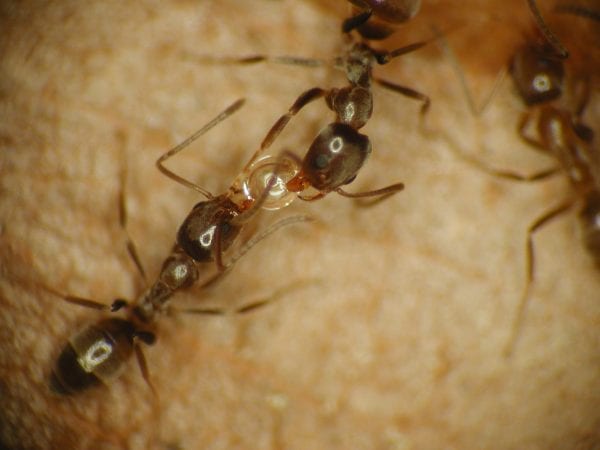 Figure 5. Ants exchange food in a process known as trophallaxis.

Baits, toxicants incorporated into a palatable food source, are effective against ants because workers share food (bait) in a behavior known as trophallaxis (figure 5). Baits should be placed in areas where ants are found foraging around the outside of structures, especially in the landscape. Interior baiting should be avoided as it may attract foragers into structures. Because colonies can be large and forage over large areas (often multiple properties), baiting for TCA may require multiple placements of large quantities of bait.

Baiting for ants as ubiquitous as TCA can be labor intensive. If a newly established TCA infestation is discovered prior to its period of rapid growth, bait treatments can be very helpful in providing control.

The success of chemical control tactics against ants is often based on the target’s colony structure and foraging biology (colony size, food preferences, and nesting habits). Control of some ant species, for instance, is best achieved with bait, because worker populations are relatively small (several thousand ants) and food preferences are met by available baits.

Control of large colonies of ants covering large swaths of property may be best achieved by actively searching for and treating central nest sites (characterized by an accumulation of eggs, larvae, pupae, and queens) with a liquid spray product. This active approach is dependent upon thorough inspection. Liquid sprays also should be applied to the structure’s perimeter as band treatments to protect the immediate area surrounding the structure and to keep ants from entering.

Perimeter treatments are typically made with liquid spray products. All will kill ants upon direct, topical treatment, and some products provide longer contact residual activity than others. When using liquid insecticides, never apply the product to flat, hard surfaces, especially if the surfaces are routinely exposed to irrigation or rain.

Contact insecticides also may be delivered as a granular formulation. Granulars are applied to thatch, high grass, mulch, leaf litter, and other areas where ants are known to nest. Never allow stray granules to remain on flat, hard surfaces where they might accidentally be washed into a local body of water.

The weight of the granule allows the insecticide to reach deeper into treated areas than would occur with a liquid spray applied to the surface of the same substrate. After application, the insecticide must be released from the granule by allowing water to wash over it in a process referred to as activation.

Granular products often are not effective during periods of drought or when artificial irrigation is not available. Granular products do, however, result in pulse activations of insecticide after every irrigation event until the granule has completely dissolved. Like liquid sprays, granular products kill ants by contact. Some granular products, such as those containing rosemary, spearmint, and cedar essential oils, may help to keep foraging ants out of treated areas. Essential oils are highly repellent to many ants.

The tawny crazy ant is a highly invasive pest ant from South America. It is most common in Texas and Florida (where it was first found) but has since spread to numerous southeastern states, including NW Arkansas and Southwest MO. Movement of TCA is mostly the result of people relocating ant-infested materials from infested to uninfested locations.

TCA are a major economic pest that disrupts the ecological balance. They may even be a pest of livestock. Large populations often cover multiple properties. Control of TCA requires a two-pronged, persistent approach: (1) elimination of trash and other debris where the ants live, and (2) the use of insecticidal baits, sprays, and granular formulations.